Even before its big win this past weekend at the 2021 Food Network & Cooking Channel South Beach Wine & Food Festival Presented by Capital One (SOBEWFF®) Kush Hospitality Group’s Frita reigned legendary among Miami burger aficionados. Once deemed one of the “Top 100 Burgers in America” by the Food Network, the burger is a juicy spin on the classic, Cuban-style burger. This past weekend, at the Festival’s 20th anniversary and the 15th anniversary of its signature Heineken Burger Bash, Kush’s frita won the highly-coveted “People’s Choice” Award – the prize: a trophy, bragging rights, and $5,000 cash! “We’re absolutely thrilled to have taken home the People’s Choice Award this year,” says Kush Hospitality Group owner/operator Matthew “Kush” Kuscher. “The Frita is a Kush staple and guests go nuts for it – to have this fan-favorite win the top prize is amazing!”

Kush’s Frita is an over-the-top, Miami-fied take on a classic frita Cubana – traditionally made with seasoned ground beef and pork patty (sometimes mixed with chorizo) on Cuban bread topped with shoestring potatoes. Kush’s version consists of a juicy all-beef patty topped with swiss cheese, bacon, potato stix, and guava jelly, dressed with its signature LoKal sauce (named after one of the other restaurants in the KHG’s stable). It’s no surprise the Kush team took home the top prize at this year’s Burger Bash; just last month, Kush Hialeah’s “Newman’s Jewban” sandwich was named one of “The 25 most spectacular sandwiches in the world” by Timeout Magazine. 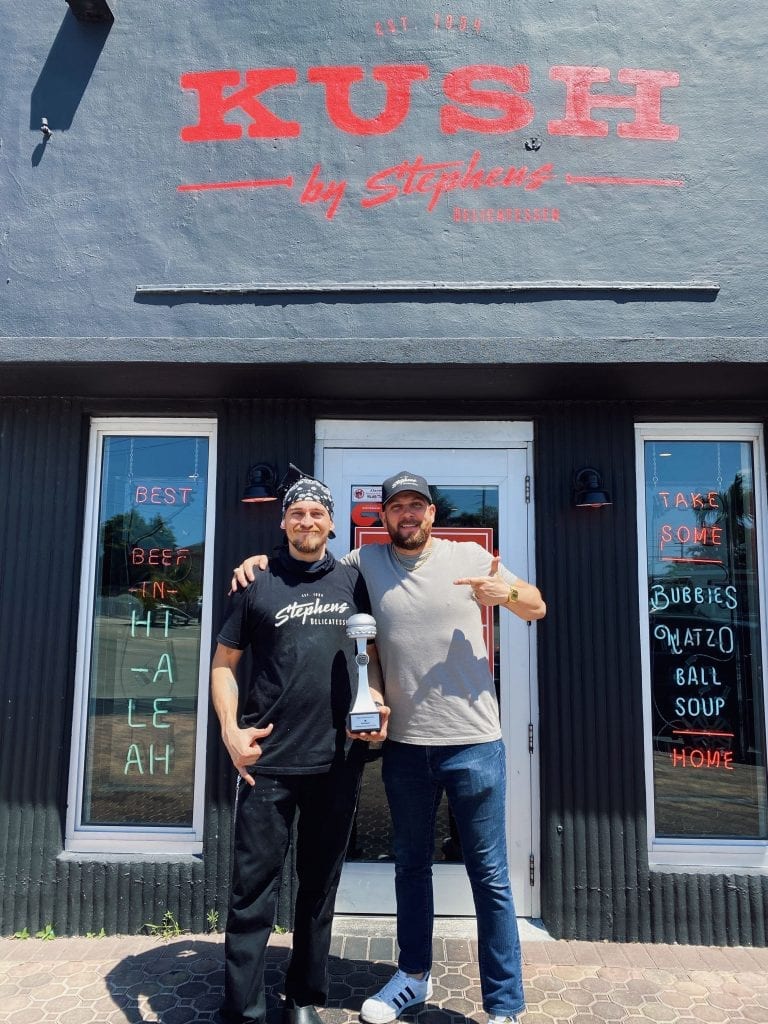 Winning the Burger Bash is no easy feat; upwards of 30 chefs/restaurants from across the country trot out the sizzling secret, often unorthodox, burger creations, looking to take the spotlight and prove their burger prowess. Rather than go into the lab to create some off-the-wall unique and/or unusual offers, Kush went with a tried & true classic: The Frita. “Sometimes simple and straightforward is the way to go, especially when you’re talking something so universal as a burger,” says Kush. “The flavor and texture of our frita is hard to beat – and I’m so glad it wasn’t.”