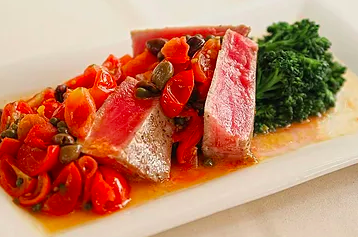 For 10 years, Quattro Gastronomia Italiana, one of the longest-running successful restaurants on Lincoln Road, has been serving up authentic Italian cuisine to locals and visitors alike. The restaurant has just renewed its lease and promises to remain a South Beach staple for those seeking sophisticated regional Italian food in a stunning indoor-outdoor setting. With a new Executive Chef, Dario Bellofiore, and an array of new dishes, Quattro continues to bring genuine Italian fare to Miami Beach’s premiere pedestrian corridor.

According to co-owner Nicola Siervo of KNR Hospitality Group, “After 10 years, the business remains solid on Lincoln Road so we decided to renew the lease. We are excited to continue serving fine Italian cuisine on one of the most important streets in Miami to our loyal and cherished customers.”

In tandem with the re-signing of the lease, Siervo and his partners tapped Executive Chef Dario Bellofiore to helm the kitchen and bring his personal touch to Quattro’s already outstanding menu.

Chef Bellofiore has just introduced several new seasonal items that expand on the award-winning restaurant’s mix of Italian favorites and inventive dishes. According to General Manager/Partner Roberto Sanso, “We are thrilled to have Chef Bellofiore join the Quattro team. There is a parallel between Miami and his hometown of Venice – both cities are surrounded by water and feature access to fresh and delicious seafood. His years of experience are a welcome addition to the restaurant and Miami Beach.” The Italian toque’s seafood expertise is apparent in new plates such as Polipo del Mediterraneo con Farro Legumi Pomodorini – grilled Mediterranean octopus with farro, legumes, cherry tomatoes, and a lemon dressing; Insalate di Mare – a refreshing shrimp, squid, bay scallops, and octopus salad; and the perfect-for-sharing Fritto Misto di Mare – a selection of fried fresh seafood.

Raised in Venice, Chef Bellofiore honed his skills working in some of the historic city’s most respected dining destinations, including the charming and rustic Do Forni and celebrated seafood spot, La Favorita. In his early twenties, the talented young chef left the “Bride of the Sea” and moved to Tampa, where he worked at Donatello Restaurant, an upscale Italian eatery. A job offer lured him to Capriccio Ristorante in South Florida, where he worked as Executive Chef.  Not content to rest on his laurels, Bellofiore accepted a position at the critically-acclaimed Nando in Hallandale, Florida where he was responsible for menu development and overseeing culinary operations. In 2013, renowned designer Roberto Cavalli opened a South Beach outpost of Cavalli Restaurant and Lounge where Bellofiore worked. He then spent time traveling and exploring world cuisines before landing at Quattro.

Quattro Gastronomia Italiana is located at 1014 Lincoln Road in South Beach. The restaurant is open for lunch and dinner daily. Quattro offers a two-course lunch for $25 Monday through Friday. Reservations are strongly suggested. www.quattromiami.com

Paella y Vino at The Dutch