The date has been set for one of Miami’s most highly-anticipated restaurant openings of the season: TALDE Miami Beach, a neighborhood restaurant and bar featuring a creative menu of Asian-American cuisine. This third outpost of the award-winning Brooklyn and Jersey City eateries by Chef/Restaurateur and Top Chef alum Dale Talde and partners David Massoni and John Bush of Three Kings Restaurant Group, will open on Friday, November 6, inside the oceanfront Thompson Miami Beach hotel located on Collins between 40th and 41st streets. TALDE Miami Beach will be open for dinner at 6 pm nightly, with late-night hours on the weekends. A native of Chicago and raised by first-generation Filipino immigrants, Chef Talde effortlessly blends the tastes, ingredients, and nuances of Eastern and Western cuisines and techniques. The result is a menu that explores new, and at times unexpected, combinations of flavors. TALDE Miami Beach aims to be an enjoyable and simply delicious culinary experience for its neighbors, hotel guests, and destination diners. “We want TALDE Miami Beach to be an approachable, everyday locals’ spot, like TALDE Brooklyn and Jersey City have become,” says Chef Talde. “We want our locals to embrace us as a place where they can get an awesome f&*%ing bowl of ramen at 2 AM, or just enjoy a consistently great meal with family and friends every time they come in.” “Thompson Miami Beach is so excited to welcome our new TALDE team to the family,” says Brett Orlando, Regional Vice President, Commune Hotels & Resorts. “Its launch this November is perfect timing to celebrate our first anniversary and deliver yet another star chef-driven, destination dining experience for our neighbors and hotel guests.” Embracing Miami’s energy, culture, and cuisine, TALDE Miami Beach’s menu of Salads, Dim Sum, Noodles, Entrées, and Sides, features a variety of market-driven ingredients and local Floridian products, combined with Chef Talde’s talents and sense of fun. Helming the kitchen will be Executive Chef Janine Denetdeel who opened the Brooklyn namesake restaurant in 2012. 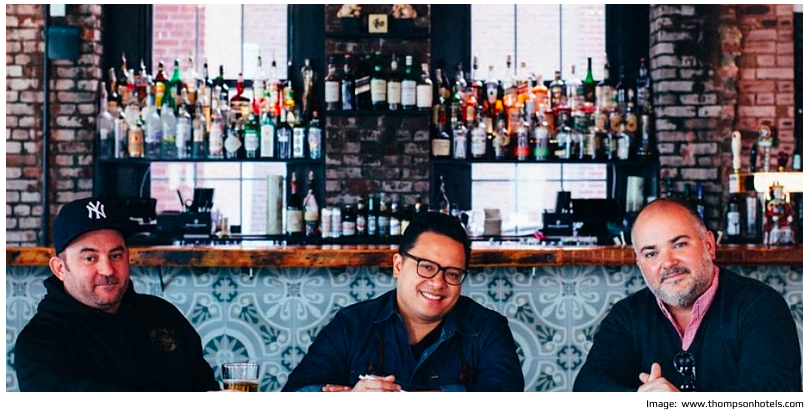 Menu stand-outs include a variety of Dim Sum such as the Pretzel Pork and Chive Dumplings ($10) served with spicy mustard dipping sauce; Shrimp Shumai ($14) with Old Bay, corn and Chinese sausage; and Noodles like the Crispy Oyster & Bacon Pad Thai ($20) finished with egg, peanuts and cilantro; and Beef Short Rib Kare Kare ($20) of Hong Kong noodles with peanuts and a Thai chili relish. Craveable Entrees include Whole Roasted Florida Snapper($34) roasted in banana leaves and served with moo-shoo pancakes; and Lemongrass Pork Shoulder ($26) with peanuts and watermelon nuoc mam. Must-order Sides include Everything Roti Bread ($5); Wok Charred Greens ($12) and garlic chips; and Crab Fried Rice ($19) with tobiko and jalapeno aioli. To complement the menu is a cocktail and beer list created by THREE KINGS Restaurant Group

partner John Bush that embrace’s TALDE’s East-meets-West spirit with inventive cocktails such as the Chinatown ($14) with Brugal Añejo, Laird’s Applejack, lime, amarena cherry and brown sugar; and Green Lightning ($12) made with house-infused green tea vodka, green tea, cucumber, and lime. Partner David Massoni has curated a robust wine program featuring Old and New World varietals that pair perfectly with Chef Talde’s inventive cuisine. The quirky ambiance of TALDE Miami Beach pulls directly from the personalities of its three owners. The sultry space reminiscent of old-school New York has the subtle influences and grit of an Asian street market, the allure of a back-alley speakeasy, and the anti-establishment art of Mafioso rap culture. New York-based designers Workshop/APD have brought this intriguing vibe to life with the use of natural materials such as weathered brick, oiled steel, and worn concrete, creating a unique 160-seat dining room joined by a large shipping container set in the middle of the space adorned with hand-painted graffiti- and media-inspired designs by Brooklyn-based artist, Mr. Ewok One. A 100-year old wood-carved dragon oversees the bar and lounge area with a capacity of 40, as a playful image of Chef Talde with bikini-clad models perched above the hostess stand. Guests are invited to stay and play with an old-school hip-hop, the 80s, and 90s soundtrack. A seven-seat chef’s counter with views into the open kitchen serves as an additional focal point for guests who want to watch and interact with Chef Talde and his team. An open-air terrace with seats for 23 will allow guests to enjoy cocktails and bar menu. Leading TALDE Miami Beach as General Manager is Peter Abbruscato, who has worked with the Three Kings Restaurant Group as part of its management team since 2012, leading the opening of TALDE Jersey City in February 2015. Thompson Miami Beach is located at 4041 Collins Avenue. TALDE Miami Beach will be open for dinner nightly at 6 PM; the bar and lounge will be open from 6 PM to 4 AM (Thursday-Saturday), with a bar menu served until 2 AM. As always, non-guests can enjoy $10 valet parking validation with any culinary or cocktail experience on property. Reservations will be accepted for parties of 6 or less via OpenTable or phone reservations. Space for private parties for groups of 7 or more is available upon request and availability.

TALDE Miami Beach will be open for dinner nightly at 6 PM; the bar and lounge will be open from 6 PM to 4 AM (Thursday-Saturday), with a bar menu served until 2 AM