It was an inarguable loss for Miami when Tobacco Road – the Magic City’s oldest bar with a liquor license dating back to pre-Prohibition – closed its doors in the fall of 2014. In a city blessed with the power of reinvention and driven to deliver “the new,” the Road was a holdover from a bygone ear of bootleggers and gangsters, barflies and brawlers. On Monday, March 1, 2021, Kush’s tribute to Tobacco Road – 50% pop up, 50% homage, and 100% dive bar chic – will open its doors to the public in the former River Oyster Bar space in downtown Miami’s Brickell area.

Tobacco Road will be as much a feast for the eyes as the palate. From a wall adorned with the iconic venue’s vintage gig posters dating back into the 1980s. Tobacco Road will feature a number of new décor upgrades, including cheeky, fun-spirited signage. Among the abundance of culturally-relevant knickknacks and tchotchkes, a provisional stage will grace the dining room, paying tribute to Tobacco Road as an integral part of Miami’s music history. The space seats 95, including outdoor seating for 10 and a 30-person private dining space Kush plans to unveil as a speakeasy; think the VIP room of Scarface’s Babylon nightclub. 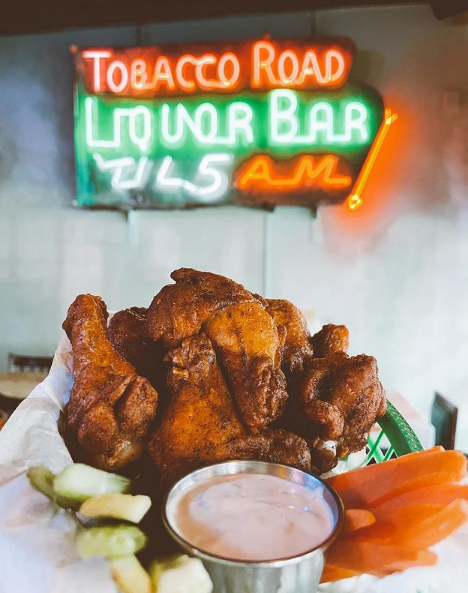 Available at lunch, dinner and delivery daily, the menu at Tobacco Road by Kush reads like a “greatest hits” compilation of American bar food, with just the right amount of elevation. To wit, opening acts include a little bit of everything, from an array of wings including Old Bay- and sofrito-rubbed and New Mexican chili, BBQ chicken nachos, and bang bang shrimp. Find menus here:  www.kushhospitality.com Beyond the food and live music, a huge draw for this itineration of Tobacco Road will be its drinks. Tons of beers will be on offer, broken down into three categories: Draft, Craft, and Shitty. Keeping things blue collar is a menu of boilermakers: an iced cold PBR and a shot including one called Yoda’s Jedi Juice – a Mickey’s with a shot of Jägermeister. Cocktails are colorfully named and powerfully made. Pours include Dan F*cking Marino, a nod to Ace Ventura: Pet Detective, which was shot in Miami, Sh*t Miami Girls Say, This Ain’t the Real Tobacco Road and Pinga Colada. The bar also offers an extensive whiskey list as well as a section called Shit*y & Mini – a lineup of dive bar classic cocktails such as Beam & Coke and Scotch & Soda served with a mini liquor bottle flipped upside down in the glass.