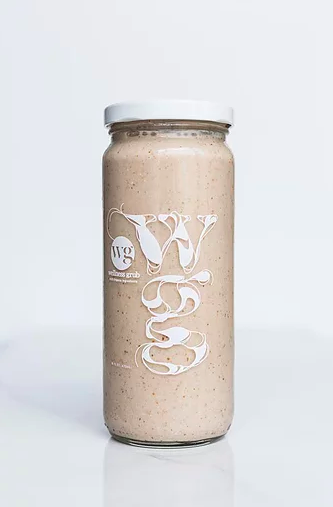 Open to the public, Wellness Grub serves grab-n-go, cold-pressed juices, smoothies, shots, and tonics, made with 100% organic, locally-sourced produce from Brothers Organic Farmers Market, as well as raw superfood bites to fuel and replenish the body and mind. Smoothies and juices can also be made-to-order at select locations. Many menu items are Kingen’s original blends, created while on the road working exhausting hours as a bodyguard for high-profile celebrities including music producer Dr. Dre, songstress Lisa Marie Presley, in addition to international diplomats.

There are dozens of juices and smoothies to select from at Wellness Grub. Two of Kingen’s signature drinks – the Green Protein Ultra smoothie and Vital Greens juice – are rich in Vitamin A, iron and magnesium. Several favorites include the Citrus Glo, which features grapefruit, orange, and lemon, while the beet-red Tru Blood juice is full of antioxidants to support the kidneys and liver.

For optimal quality and an eco-friendly approach, products are packaged in glass bottles. A self-made entrepreneur, Kingen first learned about diet and exercise from his former client, Dr. Dre. Kingen is a longtime Equinox member so it only made sense that his farm-to-bottle products have a home at the premier fitness center. Today, Wellness Grub is in a total of eight locations – five in Miami and three in Chicago. Kingen has plans to further expand the brand in South Florida.